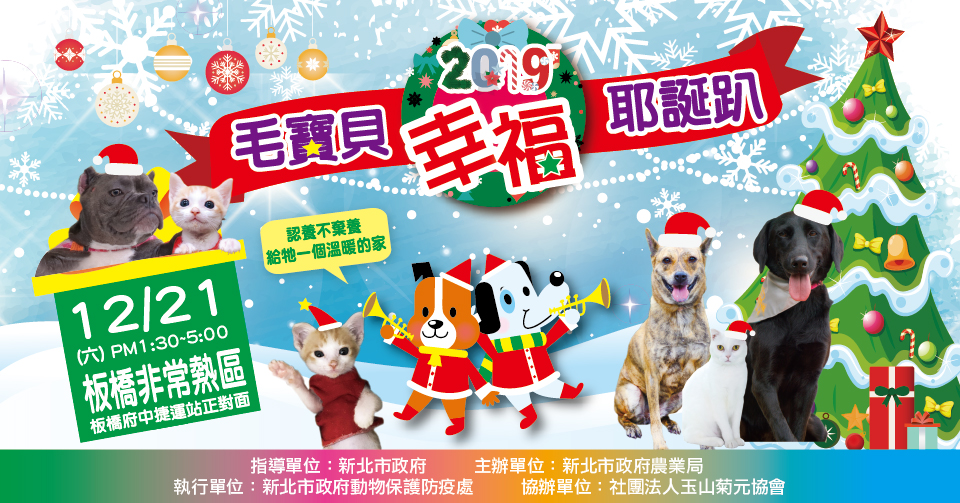 (News from New Taipei City) Animal Protection and Health Inspection Office, New Taipei City Government held the “2019 Fur Baby Merry Xmas Party” today (December 21) at the Very Hot Zone of Fuzhong MRT Station located in Banqiao District, New Taipei City. The event was unveiled by the performance of NTPD K-9 Unit (K-9 Unit of New Taipei City Police Department), followed by the Fur Baby Merry Xmas Giftbox event hosted by Deputy Director of New Taipei City Government Agriculture Department Hsu Kai-Yu Aiming to promote “Adopt, Don't Abandon” and “Give it a Warm Home”, this even has attracted over a thousand of people who also bring. As for the fur babies, their owners dressed them up in costumes fit for the occasion, just like a big star!


Apart from the performance of NTPD K-9 Unit, some other groups, such as the Choir of Banqiao Elementary School, Wind Quintet of Shih Chien University and YSJY Ensemble, truly brought a wonderful music feast to the audience. The melodious musical notes that flow gently on the street in the holiday afternoon has attracted many passersby to stop and listen to it. The most eye-attracting and exciting one was probably the Jingle Bell Golden Dog Award ceremony, where six awards –Songwriting Award, Microfilm Award, School Dog Video Award, Never Give Up Award, Long Lived Fur Baby Award and Distinguished Pet Award – with a total price of NTD100,000 were distributed to participants. When Deputy Director Hsu Kai-Yu opened the envelope and announced the winner, everyone held breath silently to hear the final results. The last big wards – Microfilm Award – was taken back by TSAI,TING-YANG who won the prize of NTD100,000.


Apart from the wonderful performance on the stage, booths under the stage also held a number of activities: not only were 100 rabies vaccines and pet chip registration freely offered to participants, but also fur babies from Banqiao Animal Shelter were dressed up as Xmas angels in the animal adoption booth of fur baby welfare zone. The cute dresses not only keep them warm, but also create a joyful Xmas atmosphere. All grown-ups and children who passed by the booth all stopped their steps and started to interact with fur babies one after another, making the venue full of laughter! Besides, in the check-ins zone, there was a human-size animal standee holding a Xmas wreath of “Adopt, Don't Abandon”. By attracting many people to take photos and do check-ins on social media, the standee managed to remind people again the importance of “Adopt, Don't Abandon” and “Give it a Warm Home”.


Director of Agriculture Department Li Wen expressed that, through various programs and activities held at this event, participants were able to understand their responsibilities as the owner of fur babies; rabies prevention measures; animal related knowledge; and the idea of supporting adoption and avoiding abandonment. By encouraging people to abide by the principles of “Adopt, Don't Abandon” and “Give it a Warm Home”, we hope that all fur babies at Banqiao Animal Shelter will find a warm home; and that, through the 2019 Fur Baby Merry Xmas Party, New Taipei City will become a joyful city for fur babies.

click images below to enter zoom-in mode, use arrow keys to switch images, use ESC to leave zoom-in mode.

The cute version of fury babies in the check-ins zone
The Key Vision of 2019 Fur Baby Merry Xmas Party
Last updated: 108-12-24 Back